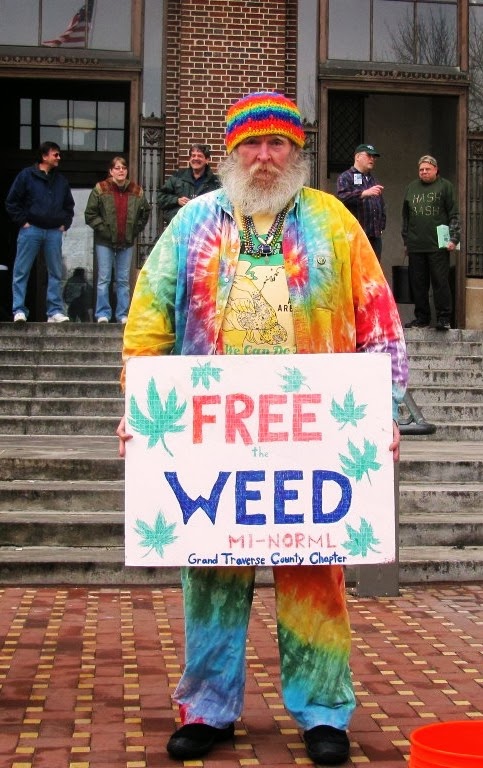 This is part 2 of a 3 part series on the Ann Arbor HASH BASH. If you read last months column you should have done your homework by now. Did you google HASH BASH and look at the images? Did you check out FREEDOM ACTIVIST NETWORK? Yes? Good. Now that you have some history of the event I thought I would touch on what HASH BASH has become in these “modern times”. Remember HASH BASH is an up from the people event. The event was shaped by those who put it together, for many many years.......UNTIL the University was told by the FEDERAL government to shut down the event. Dick Cowan, the former national NORML director, once told me about a conversation he had on an airplane on his way to speak at HASH BASH. He sat next to a U of M dean who basically told him how the University was being pressured to do something about HASH BASH. This was a HUGE realization as we (the ACLU took our first case) had been battling the university in court for a couple of years in order to get our permit. They kept losing and then each year they would try a different tactic in refusing us our permit. We sued the University 5 times in 6 years in the 90’s. Won each time and even got $5000 out of them for our lawyer.

The event was drastically changing at this time. The university had started their own police force. Prior to that they would request support from the State Police and the Washtenaw County Sheriff departments. The Ann Arbor Police had already refused to come on campus during HASH BASH because they did not want to enforce the state law. They were happy to patrol the city streets and write civil infractions.  The chief knew that his officers arresting people for weed while the city had the civil infraction would not go over well with Ann Arborites. Eventually even the Sheriff and the State Police refused to send officers unless the University PAID for their services...Between the lawsuits and the new University cops the event was starting to be very political. Remember for the first 20 years or so this event was a HUGE smoke in with 0 arrests. Lots of $5 tickets handed out, but no arrests....Then these Uni cops started arresting the shit out of people. I would be standing on the stage and see the cops dragging people out of the crowd. What the University didn’t realize at the time was that arrests make for good news stories. The media was helping us to get the word out nationwide about HASH BASH and I started to grow......Now at this  point I must point out that over the years I have paid very close attention to the crowd size on the Diag. It does not seem to matter what speakers are announced, what promotions are done, what matters and controls EVERYTHING that day is the WEATHER!  The years when the crowd was 8-10,000 people it was warm and sunny. Cold and rainy we still get 3-5000 people on the Diag.  Once the University figured out they were increasng the size of the event by forcing us into court, making us a ligitimate news story, they stopped making it hard on us. The court had also pointed out to the University that they had no real DIAG USE POLICY. So they created a very detailed policy. Since that time the attitude of the University has changed. They seem to tolerate us. They have stopped the mass arrests and only do enough to make it look like they are not allowing people to smoke marijuana on campus. Even while in prison I was sent crowd photos with copious clouds of smoke over peoples heads....It made me smile as it showed we are winning. So what is the modern HASH BASH? Yes it still is a smoke-in but that is no longer our ONLY method of protest.  As the food, fuel, fiber and medicine campaign took hold, some of the best top level activists started to appear as speakers at HASH BASH. As group like MI-NORML, ASA, MPP and SSDP started to come on board the event was becoming more and more about political action. As things began to grow (pun intended) we started seeing celebrity types contact US to see if they could appear at HASH BASH. We had friends of HASH BASH who started to donate funds so we could bring multiple well known speakers to the event. The Michigan marijuana movement started using HASH BASH as the starting point of their campaigns.  The event became a meeting place where activists from all over the state would gather. HASH BASH also started to take over Ann Arbor. While HASH BASH is the rally on the Diag that takes place from noon till 1pm, ask 10 people who claim to be at last year’s HASH BASH what time they got there and I’ll bet 8 say after 1pm....then you missed it! HASH BASH  takes place the 1st Sat in April (5th) on the Diag from high noon until 1pm when we move over to the Monroe Street Fair........Questions?


Posted by Michigan Medical Report Magazine at 11:52 AM