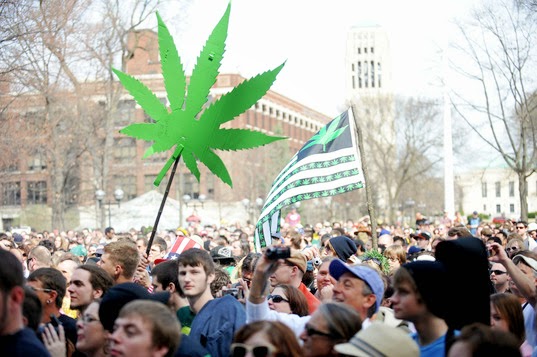 Well folks, here it is. This is the first part of a three-part series on the Ann Arbor Hash Bash.

First, let me tell you that I have only been going to HASH BASH since 1987. I have some photographs of me and my buddies standing on the Diag smoking a joint with Shakey Jake Woods. Years later when I ran Stairway to Heaven at 340 ½ South State Street, at the corner of Williams, Jake would come by for lunch one or twice a week. He would always tell me he never forgot the day we met.... Back then you could stand on the Diag any day at any time, smoke a joint and not have a problem. I met a long- time friend when he showed up at Stairway and told me he was new to town and did I know where he could score some weed. I told him if he crossed the street and walked into the Diag he would be able to find what he needed. Those days ended when the University got their own police force in 1992. There was the time when HIGH TIMES came with the FREEDOM FIGHTERS and helped us in Ann Arbor try and defeat a change to the civil infraction law. They ran a full page ad in the magazine and people started coming from all over the country. I remember the mid 90’s when we had crowds as big as 10-12,000 and warm weather. I remember asking the crowd to vote on changing the date from April 1st to the 1st Saturday. I remember Dominick’s when we had band on the balcony. I remember 2002 when we started our morning with a protest at the Federal Building protesting the deaths of Tom and Rollie. That same year THE TOYES came to HASH BASH and we SMOKED TWO JOINTS on the Diag...I will never forget:

If you want to know the history of HASH BASH check out www.freedomactivist.net/hashbash.html. Rich does a killer job!!!!!!

Of course, HASH BASH introduced me to my good friend John Sinclair. In 1996 I had the idea to invite John and I was shocked to find out he had never been invited to speak at HASH BASH. We have since become close friends and business partners. We have had some real kicks together and I love him like a father. It was HASHBASH that brought us together and for that I am grateful. I have put a lot into this event over the years. We have no budget and fund raising is very, very difficult. I have met some wonderful people who have volunteered and helped to make this the largest most unadvertised underground shut down the town it’s so big event. Every bar and restaurant is packed on HASH BASH Saturday. HASH BASH is HUGE. WHY? Because people love to smoke weed and HASH BASH is about smoking weed.

The first HASH BASH was held on Saturday April 1st 1972. It was held in response to a decision of the Michigan Supreme Court declaring unconstitutional the law used to convict poet/activist John Sinclair for possession of two marijuana joints. The new laws were to take effect on April 1st. For thee weeks there were NO marijuana laws in Michigan. The event started as a smoke-in, an act of civil disobedience. To come out on the day the new laws were to take effect and smoke a joint and say FUCK YOU to the man. For many years groups of people would gather on the Diag and speeches would be delivered, poems, drum circles....people would spend the day on the Diag. Once things started to get more political in the late 80’s organizations started to show up at HASH BASH to promote themselves to attendees. As the HEMP movement gained steam HASH BASH started to get larger and larger. As the event got bigger the University started to take notice. They tried to deny us a permit one year. That lead to a lawsuit where the ACLU to our case and beat the University. Then over the next 5 years we had to fight the University in court for each permit.

At this point I am going to tell you I have a much better way to tell you the history of HASH BASH.....

Get online......
Google HASH BASH images – spend some time on this treasure trove
then hit YOUTUBE and search on HASH BASH – you could waste a whole day on this....
I again would tell you that www.freedomactivist.net/hashbash.html is the PREMIERE info site for HASH BASH history. Of course I would suggest a joint or a dab or however you get your kicks these days and then check out the above.


Posted by Michigan Medical Report Magazine at 11:59 AM