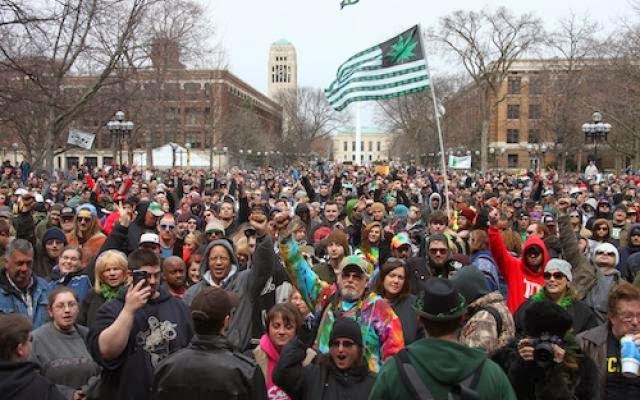 The future of HASH BASH is a good question. For many years when I would be interviewed about HASH BASH the one question that always came up was “Is HASH BASH still relevant?” You only need to look at why HASH BASH started to answer that question. It started when the state enacted new marijuana laws after the Michigan Supremes struck down the old marijuana laws. People came out to say “pass any law you want were are going to smoke us some marijuana” (My kinda people). So when asked is HASH BASH still relevant? I would say today, more than ever.
We now have a legislature that is making changes to a law that the people had to put on the books because the politicians refused to do so. As long as people are not FREE to smoke marijuana HASH BASH will be relevant. Understand the reason why HASH BASH happened on the DIAG. Back in 1972, the DIAG was like the town square, and the hip community who gathered for the first HASH BASH was much larger than the campus. Ann Arbor was very different in 1972. Now as many of you know U of M campus today is not marijuana friendly. You are subject to being arrested. This is the reason that HASH BASH starts at HIGH noon and ends at 1pm, when we head over to Monroe St for the Monroe Street Fair. With Dominick’s offering the best eats as our back drop, they shut down the street and have vendors and organizations up and down the block. If I could re-write the rules the cops would leave us alone and we would spend the whole day on the DIAG as we did for years. Or even better I would decriminalize marijuana and maybe we could leave the historical protest site and move to a city park on a warmer date to “celebrate” our victory.......but that is a pipe dream.....We will be on the DIAG for a few more years, fear not! What will the event look like in the years to come? Good question. There is one major factor at play. The event is somewhat dependent on a student group pulling the sound permit. This year there is a new U of M NORML chapter doing the honors. I expect they will ask me to emcee the event. I have been told they will be selecting the speakers.  I know John Sinclair and Ed Rosenthal will be there. Ed will be teaching a grow seminar on Friday and John will be at The Blind Pig with Laith Al-Saadi after he hits the Monroe Street Fair. The cool thing about this event is there is not  a VIP area or back stage. You want to speak with Ed or John or myself just walk on up and say hi. We will all be hanging out for the afternoon at Dominick’s. So back to the question at hand...where is HASH BASH going? I think this year the focus should be the upcoming local ballot initiatives and the attack on the MMMA by the Michigan legislators. The reason this event is so important to our community is that it attracts people from all over the state. So when you have an issue like convincing our elected officials that they want to respect the will of the people or they will be removed from office, it does not take much to get that message spread throughout the state. I can remember when Tom and Rollie from RAINBOW FARM would come with a handful of people and hand out thousands of fliers. The event is perfect for disseminating info. ( for a small fee I will share the secret on how this is done.....call me 313-999-0329 if you or your group is interested.) Also when you have all the major activists from all over the state coming you can send them home with the currant plan of action. Many campaigns have been kicked off at HASH BASH. I know there will be a push to find others who want to put together a local ballot initiative in their community. There is talk about another statewide initiative. That I would expect to be the focus of the 2015 HASH BASH. Personally I am looking forward to 2016 when it will be the 45th Annual Ann Arbor HASH BASH.

I have read some posts on social media from people looking forward to my return to HASH BASH. Please, this event is not about Adam Brook, it’s about making change and we all in this together.

Peace,
Adam Brook
I am available to come speak at your compassion club, activist group meeting, weekly poker night (no dealers choice) or your event. Call or text 313-999-0329.